A bit about Pasir Panjang

Posted by Sivasothi at 02:57 No comments:

He's working on a few new books now, one of which is about motor racing in South East Asia. One of the events which might make it into the book is the Gap Hill Climb.

This took place along South Buona Vista Road. In the photo above, you can see programmes from the Gap Hill Climb from 1951 and 1952.
Posted by pinto at 17:20 No comments:

Mayo Martin writes in Today (article no longer available) about a photo submitted to the My Life: Then & Now competition.

It is a scene that young Singaporeans will not find very familiar because it's in a kampong (village) setting. Also, when was the last time anyone experienced a flood that reached above waist level in Singapore?

If you are interested in photos like these, there is an exhibition of some of the competition entries. Orchard Central (next to Somerset MRT, former site of Specialists Centre) from 10 to 21 August.
Posted by pinto at 11:46 No comments:

LIFE photo - remains of the Duke of Kent

When Princess Marina, the Duchess of Kent visited Singapore in 1952, the Duke who accompanied her was her son, not husband.

Her husband, Prince George had died in an aircraft accident in 1942.

Amongst LIFE magazine's released images hosted by Google are these two by Hans Wild taken in 1942 in London.

"An RAF ambulance transporting the remains of the Duke of Kent, George Albert Nichlas Kent."

Posted by Sivasothi at 19:00 No comments:

The Battle at Pasir Panjang - by Cris

Blogger Cris took time off on the eve of Hari Raya to visit Reflections at Bukit Chandu. He blogged about it and concludes:

I am definitely glad that I had made some time to visit this museum because I have learnt many things. I always have this one sided minded thinking that the only Chinese and Indians fought and sacrificed to protect the country, but the visit to Reflections to Bukit Chandu, has really opened up my eyes and the way I think because the Malays had also done their part in protecting Singapore, just as much as the Chinese and the Indians. That is why racial harmony is very important in Singapore because we cannot afford to be divided in times of war, but be united to protect our very own country till the very end. It was the sacrifice that our forefathers gave, in exchange for a better Singapore in the future, and this is why we have a prosperous nation today.


Read the rest of Cris' detailed post here (blog no longer available).
Posted by pinto at 15:07 No comments: 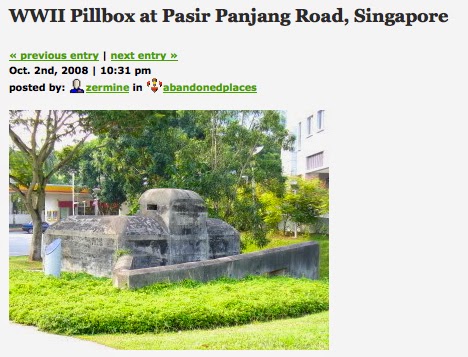 Zermine, blogging at abandonedplaces, has a short photo spread of the Pasir Panjang Pillbox. More photos of her exploration here.
Posted by pinto at 11:15 No comments: 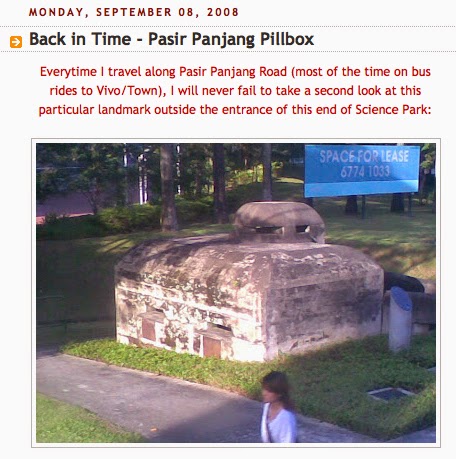 RongC passes by the Pasir Panjang pillbox often and wonders what it was like to have been there during the Battle of Pasir Panjang:

This particular WWII monument certainly had seen its fair share of action; I can picture the scenes some 60+ years ago, with enemy forces creeping around the area and fighters from the Malay Regiment inside the pillbox manning the machine guns and gunning down whoever had approached it on one hand, and worrying that they might be surprised by the sheer numbers of the enemy force on the other hand. Lam Chun See, at Good Morning Yesterday, asks a question based on a 1980s street directory: Why is Clementi labelled as Pasir Panjang?

As you can see from Chun See's scan (above) the area around Clementi Road and Ulu Pandan Road is labelled thus.

However, he notes that there are issues with both theories.

How big is (or was) the Pasir Panjang vicinity and how was the area demarcated?
Posted by pinto at 10:38 3 comments:

I made the long walk through the Southern Ridges last Saturday. Here is my visual guide to the walk.
Posted by pinto at 11:36 No comments: